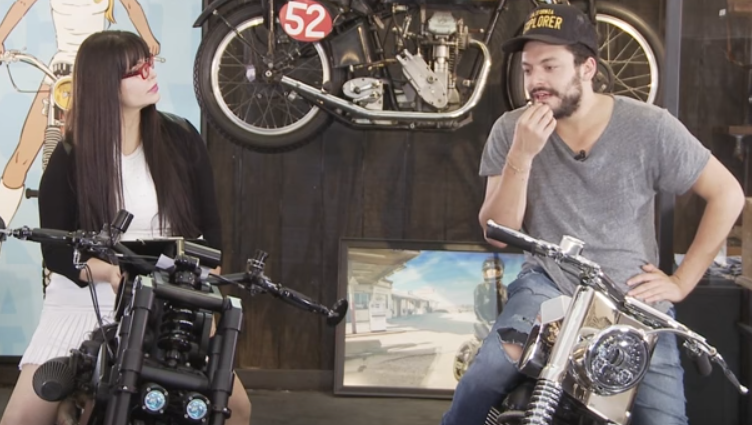 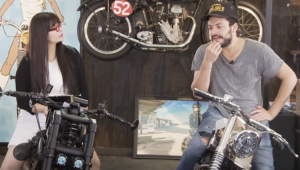 Los Angeles, 28 October 2017 – Eye on South Florida got a splash of international flavor this week as Jackie, the French Reporter, had a French liaison with France’s biggest name on stage and screen, the supremely talented Kev Adams. In the Eye on LA section, Jackie talks to the young star to find out firsthand what all the excitement in France and Europe is about for their favorite star.
Kev told Jackie about testing the waters in Hollywood: “What I know is, I like being here, I like people here, I like the entertainment here and I’m like ‘Why not? I should try!’” Don’t worry continental French fans, he’s not abandoning you as he continued: “But I love what I have in France, and it’s more than enough for me, and I love it there, and like my main career, my whole career is in France right now, but what I love is, here it is a new challenge and I’m like, I hate holidays to be honest, I love my job and I love what I do, it’s my real passion so when I have holidays I’m like, I’m gonna come here instead of going to the beach with my friends, I’m gonna come here and try to meet some people and try to make some interviews, you know, it’s like yeah, that’s what I love to do.”
A smart comedian, Kev explained the obstacles in translating French jokes into American humor, by sharing his experience that you cannot just translate from one to the other because the cultures are so different. When you make a comedy, he says, you have to speak about the culture, what people know, what people live every day. Now, he is writing original material for the American audience and doing an amazing job.
One of the reasons Kev came to America is because he really loves American movies, and when asked which one of the many he loves was his favorite, he really had to think about it: Pulp Fiction and The Wolf of Wall Street. His favorite French movies include The Intouchables by director Eric Toledano who, along with Olivier Nakache, Kev dreams of working with. If he could share the silver screen with an American actress, he says, it would be Margot Robbie. “I think she is one of the best American actresses, she’s really talented. She knows how to be awesome in Indie movies but also in super production, and she knows how to act everything. I discovered her in ‘The Wolf of Wall Street’ as a lot of people, I think, and she was like awesome and sexy and everything in the movie and she was awesome in ‘Tarzan’, and I saw her in ‘Suicide Squad’ and you know she plays this crazy woman and everything and she was so good, so yeah I think one of my dreams is to play with Margot Robbie. And maybe Emma Watson, I love her.”
Kev is currently starring in his first American production, a mobile-native* series with American YouTube star DeStorm Power and model Sarah McDaniel called Superhigh. Kev he co-wrote and produced the series with his friend, Edouard Pluvieux whom he worked with previously on Amis Publics in France. Originally intended as a fun diversion, it is getting massive attention. Superhigh sees Kev playing the role of David, a heartbroken young man who decides to cheer himself up with some top-shelf weed. Except that this time, the weed apparently comes from the very top shelf and it gives him some superpowers! That’s all we’re going to give away about the show – you’ll have to watch to see where it goes …
*Blackpills is the mobile-native, French digital media app, now available to American audiences. “Formed about a year ago, Blackpills has greenlit 54 shows from a range of talent including James Franco, Bryan Singer, Logan Paul, Christian Delgrosso, Eric Johnson, and Denise Richards slated to debut in the app this year. The goal is to release a new series weekly, according to Patrick Holzman, co-founder of Blackpills.” (Variety, 23 May 2017)
Kev’s genuine appreciation on being complimented as the “number one actor in France, by French journalists, just underlines the soul of a very grounded, very humble yet incredibly talented person, who graced our time together with not only humor but with refreshing open honesty. He shared with us what keeps him grounded: “My family and friends, I would say, for sure. They’re my support for a long time now since I started my career in France 8 years ago. Yeah, they are always here, always the same group of people, and they’re really supportive, and really hard also, sometimes, when they don’t like what I do they’re like really honest.”
Currently, Kev is doing stand-up comedy in Los Angeles. To find out where to catch this funny man, follow him on Facebook, Twitter … or the street even, he says! Next year Kev can be seen in ‘The spy who dumped me’ with Kate McKinnon and Mila Kunis and directed by Susanna Fogel – Kev’s first American movie!
Special thanks to Heroes Motors in Los Angeles for allowing us to film in their prestigious location.
To follow Kev, look for him on Facebook (@KevAdamsOfficiel) or Twitter (@kevadamsss).
Don’t forget to check out Superhigh on Blackpills – get the app in the App store or on Google Play. It’s free and loaded with a number of really high-quality content from so serious movie makers.
For more important topics and interesting events, please follow Jackie Watson, the French Reporter, on Twitter/Instagram @French_Reporter
Written by: Miquette Caalsen