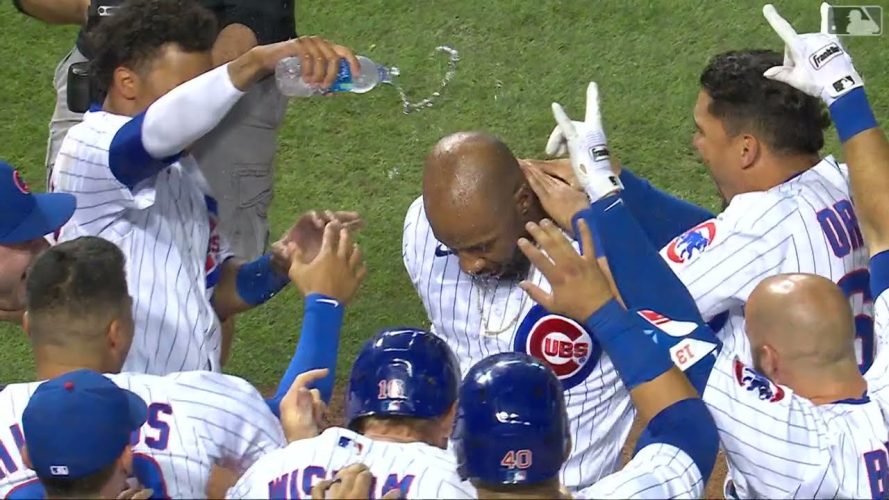 Earlier in the week, Jed Hoyer, the team’s President of Baseball Operations, spoke to the media and let everyone know that this would be the final year for Jason Heyward on the Cubs. It was interesting timing to announce the move on Monday night, with Heyward’s birthday occurring on Tuesday, but we’ll digress. While next year is technically the final year of his contract with the team, the statements made by the front office indicate that the agreement will be cut short.

Fortunately, based on reports, it sounds like both sides are in an agreement that this is the best route going forward. Heyward wants to play, and the Cubs want to focus on developing younger talent. It just makes sense that they plan on cutting him loose to make him a free-agent.

So, with Jason Heyward on his way out, let’s take a look at his top 5 moments in a Cubs’ uniform.

Our first Jason Heyward moment happens to be the last walk-off homerun the Cubs had at home. This one happened last season in early September against the Reds. With the game going into extra innings, Heyward didn’t waste any time to send the Reds to bed with a 3-run shot in the bottom of the 10th.

We’re throwing it back to 2016 with this next Jason Heyward moment. Towards the end of July during their World Series season, the Cubs faced off against the Mariners at home in a wild game. For starters, the Cubs trailed 6-3 heading into the 9th inning of that game, which eventually went to 12. Heyward took the first plate appearance at the bottom of the 12th and put himself in scoring position with a lead-off double. After advancing to third on a sacrifice fly out to center, all that stood between him and home plate was Cubs powerhouse hitter, Jon Lester.

Alright, Lester wasn’t quite the powerhouse bat, but he didn’t shy away from the moment in this game. With one out and a 2-2 count, Lester put down the best bunt of his career to allow Jason Heyward to score. Needless to say, Wrigley went wild that night.

Want to guess what our next favorite Jason Heyward moment is? Another walk-off?? You know us so well!

In the summer of 2018, the Cubs faced off against the Phillies at home in a game with a must-see finish. Facing a 5-3 deficit heading into the 9th, the Cubs never gave up and rallied to load the bases. With two outs, Jason Heyward stepped up to the plate.

After falling back to 2-0 in the count, Phillies closer Adam Morgan threw two consecutive strikes to even things at 2-2. One more strike and the Cubs would lose. But Heyward had different plans that night. A few seconds later, he cranked the next pitch over the right field wall to secure the 7-5 win.

Okay so we might have one more game winning Heyward home run to share. But, despite not being a walk-off, this one is extra special. Why exactly? Well, because it happened against the Brewers and Josh Hader.

In September of 2020, the Cubs played their northern rivals, the Milwaukee Brewers in a late-season away game. By the time the 9th inning rolled around, the Cubs were losing 2-0. After giving up a pair of base hits, Brewers pitcher Josh Hader would face Heyward next. Fortunately for Heyward, he managed to do something few batters do against Hader and cranked a 3-run drive to give the Cubs the lead.

Following Heyward’s homer, Ildemaro Vargas increased the lead with another solo bomb, and the good guys would go on to win 4-2.

This fifth and final biggest moment for Jason Heyward on the Cubs doesn’t even involve a play he made on the field. Instead, it involves words he said off of it.

During game 7 of the 2016 World Series, the umps were forced to delay the game due to rain. It wasn’t a long delay at only 17 minutes long. And as it turns out, that’s just how long Jason Heyward needs to reignite a team.

When the players made their way toward the clubhouse, Heyward called everyone into the weight room. With everyone gathered, the mood was low, so Heyward delivered his famous speech, “I know some things may have happened tonight you don’t like. . . .”

As a veteran catcher for the Cubs at the time, current manager David Ross thought his speech was going to go a whole lot differently. We have to guess he’s never been more happy to be wrong. Once play resumed, the Cubs came out with a whole new attitude to finish the game. And well, as we all know, the rest is history!