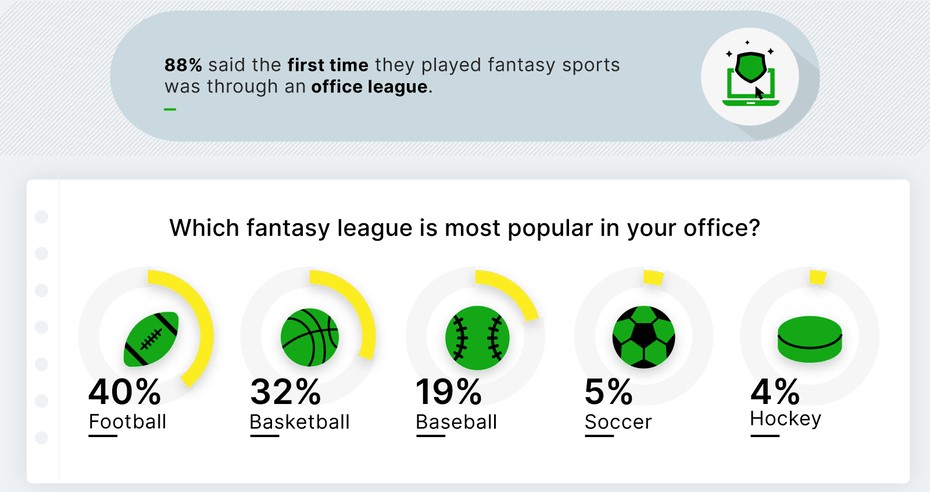 Exploring the Data Behind Fantasy Sports in the Workplace

The 2022 fantasy football season is all said and done. Commissioners are dishing out rewards to their respective champions, trophies are being passed around, and punishments are being served.  From high schoolers to retirees, many participate in fantasy sports year after year. And when it comes to fantasy sports in the workplace, your fellow colleagues are no different.

Recently, Oddseeker – an online platform that seeks to help people earn more money playing online games – surveyed X professionals to learn about their experiences playing fantasy sports in the workplace. They learned about how league members get into trouble with HR for trash talk, what participation exists across various fantasy sports in the workplace, and even how professionals think their involvement can impact their promotions and relationships.

First things first, let’s dive into what kind of the leagues are the most popular among workplace leagues.

To no one’s surprise, fantasy football was the top choice for offices, with 40% indicating their participation in the sport. Fantasy basketball came in second for the popularity vote at 32%.

It may be known as, “America’s pastime”, but baseball only ranked third, with 19% popularity. As for the remaining leagues, soccer saw 5% popularity and hockey was not far off at 4%.

While many play for the love of the game, one aspect of fantasy sports in the workplace (and everywhere else) that can spice things up, is money.

According to OddSeeker’s survey, 56% of participants indicated that they joined their work fantasy league because they needed the extra cash. On average, the highest amount people were willing to pay for an office league was $290! However, the survey results indicated a bit of a discrepancy between what employees were willing to buy-in at depending on their seniority level.

Of those surveyed at the associate level, they were willing to contribute an average of $125 to the work pool, with senior managers going as high as $372 on average. Even in an 8-person, winner-take-all league, that’s quite the bonus for one fortunate fantasy team manager.

Why Do People Play Fantasy Sports In The Workplace?

We mentioned before how 56% of those surveyed by Oddseeker said they participated in their work leagues for monetary reasons, but what are some other reasons for playing?

According to the data, the number one reason most folks play is “For the Love of the Game”, with 68% of respondents answering with this. 57% said they played for bragging rights, followed by the money reason. Bonding with coworkers was another popular choice receiving 50% of the vote, and a third of people said they participated to learn more about sports.

Unfortunately, 18% indicated that they played in fantasy sports in the workplace due to pressure from a colleague. And to add to that, women were 12% more likely than men to join a league due to being pressured. Bottom line: if you’re just getting started with running a fantasy league at your own workplace, don’t be that person. If someone doesn’t want to play that’s their call. Fantasy sports are simply a game based off another game, and despite all the attention they receive, they truly aren’t that serious.

Be Careful What You Say

The final pieces of OddSeeker’s survey we’ll look at are what respondents had to say about trash talk and how they viewed their fantasy league participation and it’s impact on their career growth.

In many games, whether it be fantasy sports in the workplace or a game of cards against grandma, there’s often a fair-share of trash talk to go along with the play.

90% of respondents indicated that they engaged in a bit of trash talk amongst their colleagues. On top of that, 57% answered yes when asked if they believed any of their coworkers had been fired for crossing the line with trash talk. So, if you’re gonna talk some smack, don’t get too mean with it.

There’s also something to be said about the effects trash talk could have on your career growth. 60% of those surveyed said that they thought engaging in trash talk prevented them receiving a raise or promotion. Ouch.

And for you experts out there, maybe save your skills for the personal leagues. Because according to Oddseeker, 75% of respondents noted that they believed they didn’t receive a raise or promotion due to winning their fantasy league on the job.

So at the end of the day, if you’re going to participate in a fantasy league at work, don’t try too hard and be ready to put your money where your mouth is. Trash talking is just fine provided things don’t go too far. Your HR department has more important things to worry about. Visit Oddseeker to read the full story on their fantasy sports research.

The post Exploring the Data Behind Fantasy Sports in the Workplace appeared first on UrbanMatter.