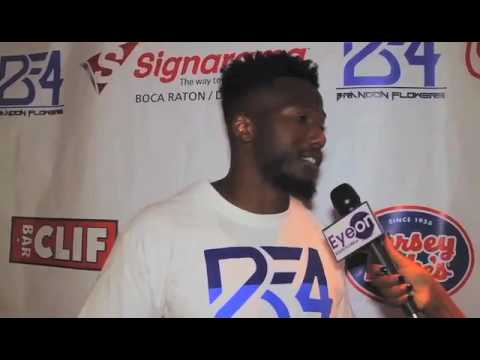 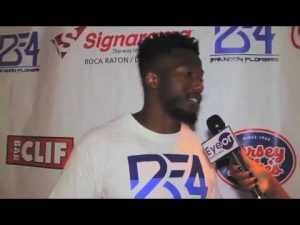 Who ever said that July is too early to think about going back to school? In a typical situation every child in America would dread thinking of the word “school” just half way through their summer break. But, for 250 students, the term “school” didn’t sound so bad.
NFL football star, Brandon Flowers headed back to his school 13 years post graduating to give kids a jump-start to their back to school supply list. In his inaugural back to school bash, Brandon provided each student with an autograph Nike backpack, paper, folders, notebooks, crayons, pencils, pens, rulers, Nike socks and top it off, a autographed photo. He had some help from his former Kansas City Chiefs teammate Abe Elam in the event’s festivities.
The evening started by Host Kim Bell of Hits 97.3 introducing herself to the crowd before bringing Brandon on stage where he gave the kids and their families a few words of encouragement. After setting his mark, he let all the kids know that school can be fun! As a great transition it was off to the games. Elementary was up first! Separated into two teams, “Team Brandon” and Team Abe”, each competed to see who could get the most rings around the pole in the allotted time given.  Brandon and his team of 6 kids won the first battle.
For middle school, things didn’t come as easy; their game required much more thought and teamwork. Each team of 5 had to successfully generate a “rocket” that went from one end of a standard chair to another using only a balloon, string, a straw, tape and a clothespin. Neither team was successful but team Abe was the closest getting their rocket half way to the other side.
The tarp throw seemed to have had the crowed most riled as the high school students schooled the pro racking up over 100pts more than the Charger corner. There were no hard feelings to say the least, Brandon congratulated, thanked and encouraged them all to continue to strive for their goals.  In concluding the night of events, there was a essay contest, of which a portion of the middle and high school students entered, where five students will receive a pair of Nike shoes and a shirt courtesy of Brandon.
Many students who attended the event came from local schools such as Banyan Creek elementary, Plumosa Elementary School of the Arts, Carver middle and Atlantic High. Other schools that were in attendance included John I Leonard, Boca High and Pahokee.