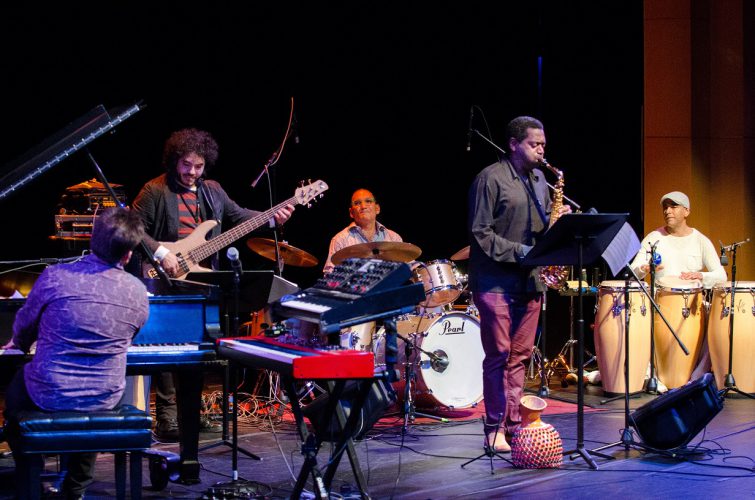 Did You Know? SFL, Featured

April 11, 2015 – Davie Florida: Havana-born pianist Manuel Valera is in the line of Cuban virtuoso pianists at the vanguard of contemporary jazz, but he represents a newer generation of performer-composers. He is a flourishing young pianist-composer, whose talent and creative drive is making a unique mark in the bloodlines of the Afro-Cuban Jazz tradition. His technique is flawless and his sound is fresh as he plays with elegance shaping his high-energy and flowing musical motifs. His composing and playing are not stereotypically Afro-Cuban. He constantly explores pan-Latin rhythmic folkloric forms, post-bop and modern jazz styles infused with classical romanticism and even some funk to develop a cerebral, culturally resonant style that he refers to as “modern Latin fusion.”

The son of a Cuban alto saxophonist, Manuel studied elementary-level classical saxophone in Havana’s Conservatory Manuel Saumell, where pianists Chucho Valdez and Gonzalo Rubalcaba began their educations. He immigrated to the United States in 1994, switched to the piano, ultimately earning a degree from The New School University for Jazz & Contemporary Music in Manhattan. Manuel rapidly became recognized in high-profile jazz circles with early professional experiences playing and touring with Paquito D’ Rivera, Arturo Sandoval, Steve Turre, Claudio Roditi, the Machito Orchestra, and the Jazz at Lincoln Center Orchestra, prior to focusing on his own band. The latest iteration of Manuel’s vision is the New Cuban Express band. The eponymously named recording was nominated for a Latin Jazz Grammy in 2013. On the heels of Expectivas comes In Motion, further reflecting on how this fusion band defies labels while creating an innovative experience not only of discerning jazz aficionados but with audiences of all types.

The artists who performed with Manuel Saturday night were electrifying. Yosvany Terry, the most harmonically advanced, cerebral saxophonist to leave Cuba since Paquito D’Rivera, was on the front line and percussionist Mauricio Herrera ignited the rhythm as only he could do. Bassist Armando Gola, (already known to the SFJ via appearances with Eldar’s trio and Ignacio Berroa’s quartet) teamed with Cuba’s greatest drummer, Horacio “El Negro” Hernandez. Together, they provided a continuous burn in the rhythm section with a clave-based fierce punch and crisp snap that are unique to El Negro’s grooves.

The Rose and Alfred Miniaci Performing Arts Center is part of the Alvin Sherman Library, Research, and Information Technology Center on the Nova Southeastern University main campus. This exceptional, 498-seat auditorium is equipped with state-of-the-art lighting and acoustics. The Performing Arts Center enhances both the academic experience at NSU, as well as the cultural life of the community at large, through its academic seminars and arts programming. The Broward Center for the Performing Arts, as managing partner of the theater, provides additional cultural programming opportunities for Broward County residents, University students and faculty members.