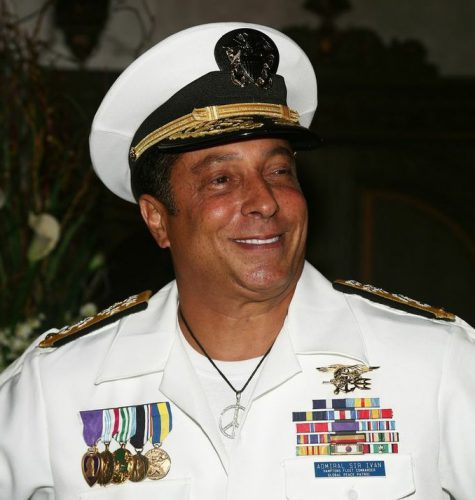 From Miami to the Hamptons Sir Ivan closed out the summer this year with another giant bash, the Sinners and Sailors Soiree, where men were all in white with sailor’s hats, and women were dressed in burlesque inspired costumes. Dina Lohan, George Wayne and CBS’s Bart Scott (a former NY Jet) were among the 500 guests. The entire Castle was made to look like a giant three story grey battleship, named the U.S.S. Sir Ivan’s Castle. There was an actual brig, which the guests jumped happily in and out of. XB’s new premium Sex on the Beach cocktails matched the nautical theme perfectly. Later in the evening, Admiral Sir Ivan had a surprise for his guests: calling through a giant megaphone, he called “All Hands on Deck! We are under attack! Man your battle stations!” Red lights were shining, sirens blaring.. and under his command, brightly lit yellow glow sticks torpedoed from his battleship Castle above, and into his pool. Sir Ivan shared with his guests, “ I wish we were in a world where wars were fought with glow sticks,” and thanked his guests for supporting his non-profit organization, the Peaceman Foundation, which battles hatred, violence and P.T.S.D., all year and to support Wounded Warriors. He called to a scantily clad girl who was swimming along, to step out of the pool, “There is a battle going on, but you have the right idea to defeat the enemy. Make love, not war.”
About Sir Ivan
The Peaceman Foundation
Sir Ivan is the founder of The Peaceman Foundation, a non-profit charity that battles hatred, violence and Post Traumatic Stress Disorder (PTSD). His personal recording artist royalties from album sales are donated to the Foundation. As the Foundation’s spokesperson, he dresses as a caped character called Peaceman and sometimes goes out on good-will missions dressed in costume. The Foundation has made a substantial contribution to The Trevor Project, the leading national organization providing crisis intervention and suicide prevention to lesbian, gay, bisexual, transgender and questioning youth (LGBTQ.) He also financially supports Superheroes Anonymous, an organization of real-life super heroes that perform community service, including feeding the homeless.
Sir Ivan’s Castle
In the late 1990s Ivan and his brother Alan built a 15,000-square-foot (1,400 m2) medieval-style estate in Water Mill, in the Hamptons, on Long Island, New York.[3] Originally called “Wilzig Castle” when co-owned with his brother, it is now referred to as “Sir Ivan’s Castle,” and has been dubbed by the media as the “Playboy Mansion of the East Coast”. The Castle has been featured in a numerous television shows, including the Travel Channel’s Grand Castles of America.[5] Sir Ivan’s Castle hosts many different charity events, and is rapidly becoming the most famous party venue in America.
Special thanks to Steve Deitsch and Anna Patton for contributing and sharing the video coverage and photos