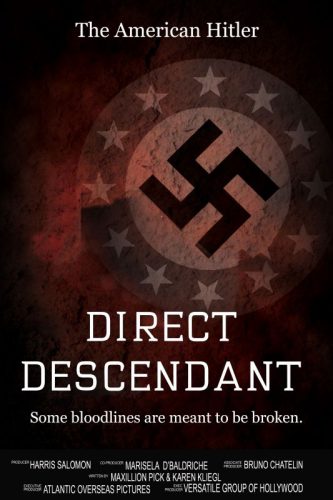 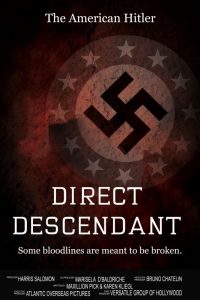 Worldwide–Producers Bruno Chatelin of Major Buzz Factory, Harris Salomon of Atlantic Overseas Pictures, and Marisela d’Baldriche of The Versatile Group of Hollywood, are proud to announce that their premiere property, DIRECT DESCENDANT, is in its second phase of development. Marisela explains: “This script was the work of an international team of researchers who were determined to uncover the truth about one of the most complex personalities of World War II.”

Direct Descendant follows William Patrick Hitler, Adolf’s English-born nephew, as he tries to make his way in Germany. When William fails to flourish in his father’s land, he decides to blackmail his Uncle. William and his mother, Brigid, proceed to enact a great act of revenge against the Hitler family, only finding safe refuge in the United States following their success. Harris stated, “This brings to light the Hitler family, something Adolf himself rarely spoke about. He had sisters and a brother who each had families. These people played a key role in the monster Adolf became and the course of the war.”

One of the many unusual factors in the project is the way women are treated in the script. Marisela adds, “No one has more steel than Brigid Hitler, Adolf’s English-born sister-in-law. She is a fierce Mom, who takes on the entire Nazi party for her son’s welfare.”

Now that the project has secured initial financing, the producers have begun to select final talent.

For more information about the project, or to receive investor packs or copies of the script, please connect with Marisela@versatilegroupofhollywood.com.