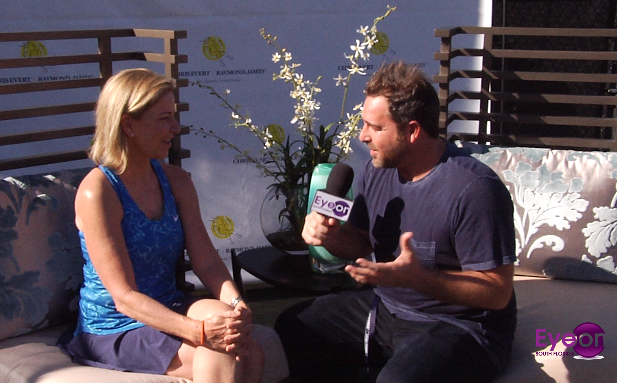 The monies go toward programs that are funded through the Ounce of Prevention Fund of Florida and through the Drug Abuse Foundation of Palm Beach County.

The latest fundraising totals push the 28-year total over the $24 million mark. The weekend’s events included a Pro-Am, a Charity Gala and two days of Pro-Celebrity Tennis.

Included in the $800,000 was more than $200,000 from Saturday evening’s Charity Gala’s Silent and Live Auctions and a special “Tennis Ball Can Challenge” that was held on Sunday afternoon.

The “Tennis Ball Challenge” had “Dr. Phil” and Luke Jensen hitting tennis “moon balls” to Chris Evert and Martina Navratilova, who attempted to catch them in a tennis ball can. That event netted $96,000 toward the auction.

Here are several of the Gala items auctioned off Saturday night:

*Two (2) Wimbledon packages that include center court seats for the women’s semifinals and finals as well as four (4) nights at the WTA Official hotel went for $15,000 each.

*Two (2) tickets to the Presidential Suite at the US Open for the men’s and women’s finals and exclusive access to the event went for $21,000.

Both young women are participants in the Healthy Families Florida home visiting program funded by the Florida Department of Children and Families and administered by the Ounce of Prevention Fund of Florida, which partners with Chris Evert Charities in supporting at-risk children and families.

Williams was pregnant and living in a domestic violence shelter when she reached out for help. She now lives in a home for single mothers where she receives support while attending Tallahassee Community College. She is two classes away from earning an AA degree and will use the scholarship to complete her bachelor’s degree.

Bowman is a single mom attending the College of Central Florida and will use the scholarship to complete her bachelor’s degree. She has recovered from a past filled with alcohol abuse, and is raising a son.

The Chris Evert Charities scholarship program began in 1995 and honors the late Gerulaitis, a friend of Evert’s who was ranked in the ATP Top 10 for seven straight years until 1983.

Boca Raton, FL: Chris Evert announced at her annual Pro-Celebrity event that the charity would be awarding an annual Alan Thicke Memorial Scholarship beginning in 2018.

Like the Vitas Gerulaitis Memorial Scholarship that has been awarded to parenting women who attend The Ounce/Chris Evert charities-based programs, winners of the Alan Thicke Scholarship will be able to continue their educations while financially supporting their children.

Thicke was a regular attendee at the Pro-Celebrity event. He passed away last December three weeks after participating in Evert’s charity event.
-30-
ABOUT CHRIS EVERT CHARITIES, INC.
Since 1989, Chris Evert Charities, Inc. has raised more than $23 million in an ongoing campaign to provide a bright future for Florida’s most at-risk children. With the help of loyal and generous sponsors, participating celebrities, legions of volunteers and a dedicated staff, Chris Evert continues to raise monies to fund programs through the Ounce of Prevention Fund of Florida. With events at the celebrated Boca Raton Resort & Club and the Delray Beach Tennis Center, this multi-day event features a day of Tennis With Chrissie & Friends at the Pro-Am, back-to-back days of Pro-Celebrity Tennis and the annual Gala, an elegant evening of entertainment, dining and dancing. The event is one of South Florida’s longest-running charity events hosted by a former professional athlete. For more information, visit www.chrisevert.org.