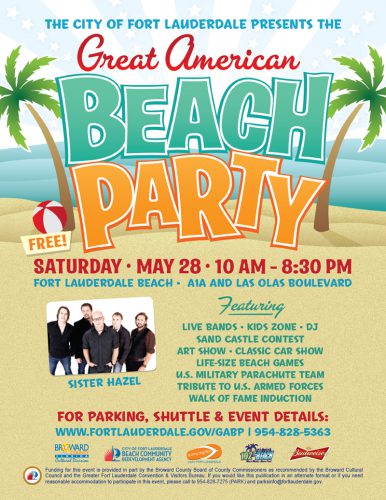 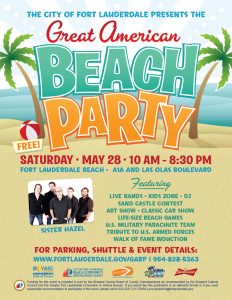 Kickoff the summer and Memorial Day weekend at the 7th Annual Great American Beach Party on Saturday, May 28, 2016 from 10:00 a.m. to 8:30 p.m. on Fort Lauderdale Beach near A1A and Las Olas Boulevard.

The free event will transform a portion of Fort Lauderdale Beach into an entertainment mecca, featuring music, live performances, and activities for the entire family including a kids zone, sand castle contest, an art show, and a free movie showing on the beach!
Entertainment

Sister Hazel
Sister Hazel is an alternative rock band from Gainesville, Florida, formed in 1993. They have built their career success and national name recognition through their chart-topping hits, countless national media appearances, relentless touring and the release of eight full-length albums. Sister Hazel is comprised of five gifted, seasoned musicians whose well-spring of natural talent has been called “one of the Top 100 Most Influential Independent Performers of the last 15 years” by Performing Songwriter Magazine. The band’s upbeat hits include “All for You,” “Change Your Mind,” and “Your Winter.” Sister Hazel recently released its first country-influenced album, “Lighter in the Dark,” which includes a notable track collaboration with Darius Rucker.
2016 Walk of Fame

The City of Fort Lauderdale established the Walk of Fame in 2010 at the inaugural Great American Beach Party to pay tribute to the legendary Connie Francis on the 50th Anniversary of “Where the Boys Are,” the 1960 film which made Fort Lauderdale an overnight sensation and a “must see” destination for visitors.

Walk of Fame Honorees are recognized for outstanding work in their respective fields and for making long-term positive contributions to the City of Fort Lauderdale. As part of the awards program, each honoree receives a commemorative marble paver that is placed in the Walk of Fame to memorialize their outstanding accomplishments. The Fort Lauderdale Walk of Fame is located on the beach along the east side of A1A at Las Olas Boulevard.

Walk of Fame Honorees are announced at the Great American Beach Party, which annually takes place on the Saturday of Memorial Day Weekend.