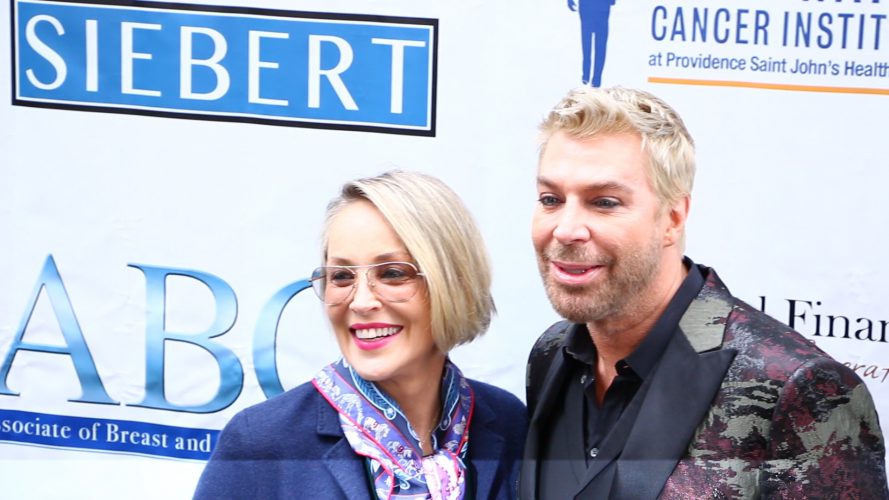 Actress, comedian Kym Whitley, emceed and Beverly Cohen and Sheri Rosenblum co-chaired the event. Prior to the luncheon, there was a luxury boutique featuring a fashionable array of select vendors donating a portion of proceeds from their sales to the organization.

“Both our honorees are incredible role models and have demonstrated a long-standing commitment to health and wellness in the community,” said Gloria Gebbia, president of the ABCs.  “Their mutual commitment to giving back through a host of worthwhile endeavors, symbolize the very best of what our Achievement Awards represent.”

“Every year, Gloria Gebbia and the ABCs create an amazing luncheon that raises much needed funds to support the Institute’s breast and prostate research” said Patrick Wayne, chairman of the board at John Wayne Cancer Institute and son of the legendary actor John Wayne. “We are forever grateful to their commitment to our mission to eradicate cancer and eliminate patient suffering worldwide.”

The Mother of the Year Award was presented to Sharon Stone by her three sons, Roan Bronstein, Laird and Quinn Stone.  Stone began her career in New York, working as an internationally successful model and actor.  She made her film debut in Woody Allen’s Stardust Memories and in 1992, starred in the blockbuster Basic Instinct.  She earned a Golden Globe Award and Academy Award nomination for her role in Martin Scorsese’s masterpiece, Casino.  Other film credits include, The Muse, Sphere, Total Recall, Sliver, Bobby, The Quick and the Dead, Alpha Dog, Fading Gigolo and Lovelace.  Sharon earned an Emmy Award for her role on The Practice.  In 2017, Stone is appearing in The Disaster Artist, A Little Something for her Birthday and HBO’s limited series Mosaic.  She has served as the amfAR Global Fundraising Chairperson for more than 20 years, raising hundreds of millions to find a cure for AIDS and is a Knight Commander of Arts and Letters in France.  She is a committee chair with YALA and has co-chaired Planet Hope for decades.  In 2013, Stone was honored by the Nobel Peace Laureates at the Nobel Peace Summit where she was given the “Peace Summit Award” by his Holiness the Dalai Lama for her continuous humanitarian work.

Long-time client and friend Lisa Rinna presented the Humanitarian Award to Chaz Dean.  Celebrity stylist Chaz Dean has a little black book of A-list clientele that reads like a “who’s who” of Hollywood. Dean launched his brand with one product, a Sweet Almond Mint Cleansing Conditioner, in November 2000 with a strong belief in a natural, healthy lifestyle. Since then, he has launched over 500 products in multiple categories including hair care, body care and fragrance, while also leading QVC as the top Haircare brand since 2005.  At his luxurious Los Angeles salon, the Chaz Dean Studio, his philosophy is built on harmony and holistic methods. This originally lead him to develop the successful WEN Haircare & Body Care line of products and continues to be the driving force for his work with clients today.  With the success of WEN, Dean has appeared on The Doctors and Life Changers, speaking about healthy hair and hair transformations. He’s also currently featured on Bravo’s Flipping Out with Jeff Lewis and Celebrity Apprentice. As Dean’s business has continued to grow, so have his contributions to people and animals in need. He supports Stand Up To Cancer, Habitat for Humanity, APLA, Best Friends Animal Society, the Oprah Winfrey Leadership Academy for Girls and a host of others.  Blessed with the opportunity to wake up every day with a passion for his work, Dean continues to lead the industry in innovation, humility and respect for an ever-changing industry.
About the ABCs

The ABCs was formed 27 years ago by a group of dedicated philanthropists who had originally been associated with the Eddie Cantor Charitable Foundation, an organization that supported a variety of causes. These individuals wanted to devote all their charitable efforts and resources to eradicating cancer and unanimously chose to support progressive and innovative breast cancer and prostate cancer research at the John Wayne Cancer Institute. Today, the Associates for Breast and Prostate Cancer Studies are over 150 members strong and growing. They dedicate their efforts to funding research in breast and prostate cancer at the Institute, and since 1990, have raised more than $15 million. For more information, please visit www.abcjw.com.

Since 1981, the family of John Wayne has been committed to pioneering cancer research in memory of their father, who died of cancer. For more than 30 years, the courageous and dedicated researchers at the John Wayne Cancer Institute have made groundbreaking discoveries that have changed the way cancer is detected, diagnosed and treated around the world. Today the tradition of excellence continues as the Institute spearheads new research advances, while training the next generation of leaders in the fight against cancer through its renowned Surgical Oncology Fellowship Program. The Institute’s programs focus on melanoma, breast, neuro, prostate and gastrointestinal cancers, as well as innovative research in cancer genomics, molecular biomarkers, and chemo- and immunotherapies. With its unique ability to rapidly turn scientific discoveries into novel approaches for early detection and treatment, the Institute provides immediate hope to cancer patients everywhere.  www.JWCIgiving.org.