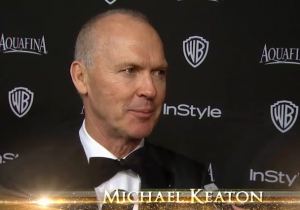 Our Host and French reporter Jackie Watson had her eyes on everything Golden Globes at the 2015 InStyle and Warner Bros. after-party.

By InStyle: Sharon Clott Kanter If the Golden Globes show was full of emotional moments—hello, George Clooney, Gina Rodriguez and Michael Keaton’s speeches—the InStyle and Warner Bros. after-party is where the stars really got to let loose. It’s true: Just 60 seconds after Richard Linklater accepted the Best Picture Globe for Boyhood, a steady flow of the Globes’ winners, nominees, and guests headed out of the Beverly Hilton ballroom and right into the hotel’s Oasis Courtyard to get down at our annual bash.

You couldn’t move without spotting a celeb: Jennifer Aniston and Justin Theroux shared loving smooches as they made their way into the moody lodge-inspired space designed by Thomas Ford of Tom Ford Designs, Jenna Dewan-Tatum and Channing Tatum were the first to hit the dance floor (of course!) and got down to Whitney Houston’s “I Wanna Dance With Somebody,” and the cast of The Affair all congregated in a corner to celebrate their wins, including Ruth Wilson, Dominic West, and Joshua Jackson. We spotted J.K. Simmons chatting about his Best Supporting Actor in a Motion Picture win with Whiplash co-star Miles Teller—only he left his Golden Globe trophy on a nearby table unguarded (no one took it, we promise).

One the other side of the room Taylor Swift set up camp with every T-Swiz BFF in sight, including the Haim sisters, Jaime King, and Lorde, while Sarah Hyland and Isabelle Furhman tested out the photo booth in the Aquafina lounge. The Orange Is the New Black stars rolled in together and soon Danielle Brooks, Taylor Schilling, and Uzo Aduba all headed to the extensive buffet station to dig into the grain bar, slider station, and salmon and turkey delights. “I’ve been on a 10-day vegetable and juice cleanse, but that ended tonight!” Brooks told us.

The party continued as stars got down to DJ Michelle Pesce’s mixes, and we spotted Hailee Steinfeld grooving to Madonna’s “Like a Prayer” and Quvenzhané Wallis shook her Armani-draped mini-hips to Avicii and Aloe Blacc’s “Wake Me Up.” How to Get Away With Murder’s Alfred Enoch skipped the dancing, however. “My pants are too tight to do anything!” he said. “I can barely go down stairs!”

More than 2,000 people came in and out throughout the evening and stayed until the wee hours of the morning.