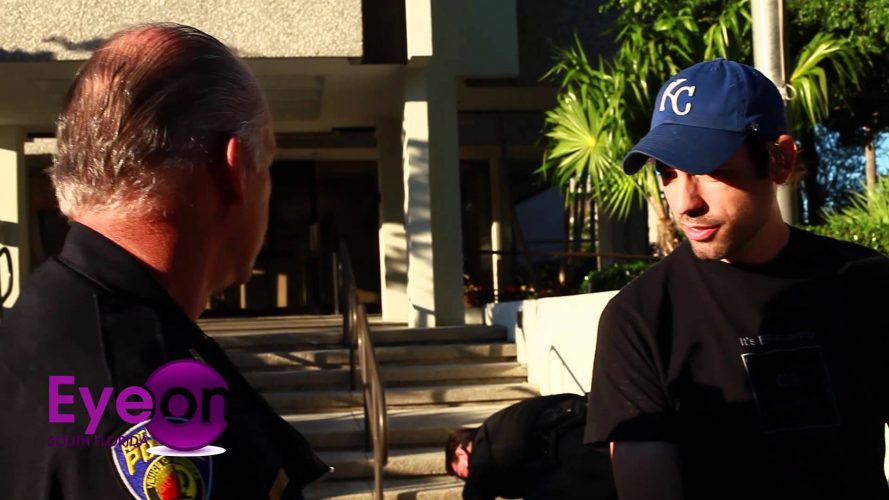 Did You Know? SFL

By Dylan Bouscher, EyesOnNews.com, photojournalist, Nov 15, 2014 – Fort Lauderdale — City officials are going to court over new regulations on public food sharing, which police are using to give $500 fines to those feeding the homeless in downtown.

Arnold Abbott, 91, has been ticketed twice for defying a new city ordinance that regulates sharing food outdoors. The most recent ticket was issued during a dinner feeding on Fort Lauderdale beach on Nov. 12.

Abbott, a founder of the Love Thy Neighbor fund, has filed a court motion asking the Broward Circuit Court to enforce the ruling from the 2000 case Arnold Abbott V. the City of Fort Lauderdale, which upheld Abbott’s right to feed the homeless in public spaces. Until the court case is settled, Abbott said he plans to continue feeding the homeless. When he was cited yesterday, Police said they did not have a copy of the court ruling that allowed Abbott to serve the homeless.

“We want to do everything within our power to assist, and to provide a safe and sanitary environment for the city of Fort Lauderdale, and all of its residents and guests,” Fort Lauderdale Police Captain John Labandera told Abbott before citing him. “The City of Fort Lauderdale’s desire is to complete a very good resolution to this issue.”

Labandera then offered Abbott two alternative locations the city established for public food sharing. Abbott refused to move and was issued a citation.

Aaron Jackson, 33, has also been cited twice for serving 30 pizzas to the homeless outside Fort Lauderdale City Hall — twice in the last week — on Monday Nov. 10 and again on Tuesday Nov. 11 at 4:00 p.m. Jackson, a former CNN hero and President of the non-profit Planting Peace, was surrounded by 10 police officers when his second citation was issued.

“I don’t think the situation is going to get any better, because no matter what, people are going to remain hungry,” Jackson said. “As long as people are hungry, we’re going to continue to feed.”

Jillian Pim, 30, from the South Florida chapter of the national activist group Food Not Bombs, is finishing the second week of her hunger strike. Yesterday, Nov. 14, the local chapter continued its weekly feedings in Stranahan Park, something the group claims it’s been doing for seven years.

The feedings are a response to a city ordinance passed on Oct. 21, which regulates public food sharing and requires a permit, a bathroom, and hand-washing facilities among other conditions. When asked how he expected the standoff situation to end, Nathan Pim, 29, from “Food Not Bombs,” referred to the same situation in Philadelphia — a city that enacted similar public food sharing regulations in 2012 that were overturned in court.

Mayor John P. “Jack” Seiler originally defended the city’s handling of the issue with a statement claiming the regulations do not ban outdoor feeding. On Nov. 10, he went on the Daily Broward radio show and admitted the city could have addressed the issue sooner.

“We as a city probably should have come out on front of that issue,” Seiler said.

Video
Did You Know? SFL, Featured

Video
Did You Know? SFL, Featured

Did You Know? SFL